Why have UK spot gas prices gone down?

Over the last decade spot gas prices in the UK (NBP) and the Netherlands (TTF) have been almost identical. However, with the recent drive to move away from dependence on Russian gas, these prices have diverged significantly, and UK prices have fallen dramatically. For example, on 19th May, TTF Day ahead prices were €89/MWh, equivalent to 221p/therm, while NBP prices were only 97p/therm. This is less than half of the NBP average price in the first four months of this year, (218p).

This divergence extends for the rest of the summer but disappears in the winter and is replaced by an NBP premium.  The table below shows TTF and NBP forward curve prices up to Summer of 2025.   The discount to TTF reappears next summer, albeit at a lower level. 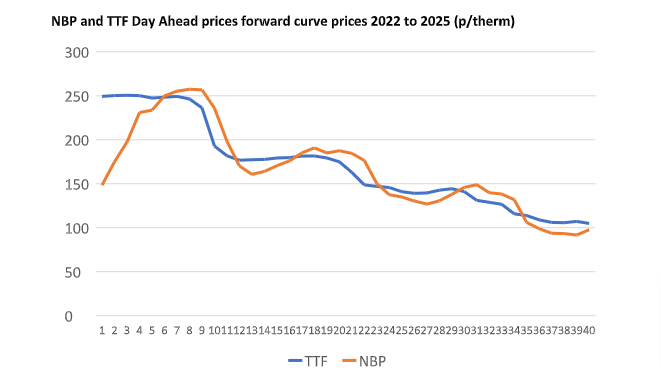 2. Why have prices diverged?

In recent years the pattern of gas supply in Europe has been predominantly from East to West, with Russian pipeline gas flowing to markets in Western Europe. All of the pipeline interconnections and compressors were set up with that in mind. However, since the Ukraine invasion, the pattern of gas supply has changed, with major reduction in Russian volumes, and a surge in LNG imports. This has led to restrictions gas flows out of France and into Netherlands /Germany. The relative shortage of LNG import capacity in the core North West European markets in the Germany and the Netherlands has meant a switch to LNG imports to UK import terminals for onward transmission to the rest of Europe. However, export capacity in the Interconnector and BBL pipelines is limited and in recent weeks these lines have been booked to capacity. In fact National Grid Gas has recently been forced to curtail LNG deliveries into the UK. As a result, it has not been possible to move additional gas into the higher priced markets in the Netherlands and prices between the NBP and TTF have diverged dramatically.

The same phenomenon has been observed in Spain, where the PBV/MIBGAS prices have fallen below TTF, these were €75/MWh on 19th May compared with €89/MWh at TTF. PEG prices in France, at €75/MWh yesterday, have also fallen well below TTF levels.

3. How long will this divergence continue?

a. A lot of the divergences in price are due to deficiencies in infrastructure which can always be eliminated over time. Some of these such as compressor settings and pipework could potentially be adjusted within a matter of months. There will also be at least 1 new FRSU available in the Netherlands by Q3 2022.

b. However new onshore LNG terminals, such as Brunsbuttel, will take another 3 -4 years to come onstream, although other FRSUs should be available in 2023.

d. Although TTF shows a premium over NBP in the next few summers, although NBP is still higher priced in winters over this period. Given the reduced willingness of European buyers to use Russian gas in future, there could be shortages of gas in cold winters. This probably does not bold well for security of gas supply in the UK this winter. The UK has traditionally depended heavily on gas imports from EU countries in times of high demand. These may not be forthcoming in future.