Reading press coverage of energy matters at the moment you get the distinct impression that gas is a thing of the past and the future is all about renewables and nothing else: Boris Johnson has recently said that by 2035 all UK electricity will come from renewable sources. The switch to non-CO 2 producing fuels is the right policy to pursue but I suspect Mr Johnston seriously underestimates the cost and the difficulties in this switch. It may take a lot longer than he imagines. The likelihood is that the UK will be at least partially dependant on gas for several decades to come and gas will continue to play a major, albeit diminishing, role in the European energy market until 2050 and perhaps even beyond. This short paper will set out some of the difficulties and barriers the market will face.

Gas demand is likely to remain constant in Europe in the short term, up to the middle of this decade. The IEA forecasts 1 shows Gas demand in Europe at between 572 and 598 bcm/year 2 by 2025, compared with the 2020 level of around 589 bcm. Even by 2040 European gas demand should still be between 332 and 536 bcm/year, between 55% and 90 % of current levels. Ironically this market strength in the short term is largely because of government energy policies to reduce CO 2 emissions. These policies have sounded the death knoll for coal use in generation in Europe, as coal is a bigger emitter of CO 2 than gas. Coal fired generation is disappearing all over Europe. Nowhere is this more apparent than in Germany. As recently as 2018 Coal/Lignite provided around 35% of Germany’s electricity. However, Germany has now decided to phase out coal and lignite generation, although this change over will not be completed until 2030. The effect of this switch is that in the short/medium term gas consumption in Germany will increase from the current level of around 90 bcm/year to around 110 bcm/year. This process will be compounded by the German decision, taken in the wake of the Fukushima disaster in 2011, to phase out all their nuclear power stations by 2023. Belgium has also taken a decision to phase out nuclear power by 2025, to be replaced by gas fired generation. This will probably add around 2-3 bcm to European gas demand.

Although Government policy on consumers use of energy is still at the formative stage, it may focus on persuading consumers to switch from using gas to using electricity, especially for domestic use. In the domestic market gas is the dominant fuel and it may not be easy to displace it. In 2020 gas accounted for 65.5% 3 of all domestic energy use. Measures to encourage switching to electricity are already in place. In 2019 the UK government announced that new gas fired boilers would be banned in new housing from 2025 onwards and installation in existing properties banned from 2035. However, the distant nature of the latter policy measure means that the hoped-for reduction in gas consumption will take a long time to come through. Even in the 2040s gas demand should still be relatively high in the UK.

The high Levels of gas demand in existing markets, relative to electricity, have significant implications for infrastructure, which will require major new investment. The figure below shows that Gas demand in the UK in 2020 was almost 2.5 times as great as demand for electricity 811,000 GWh compared with 330,000. 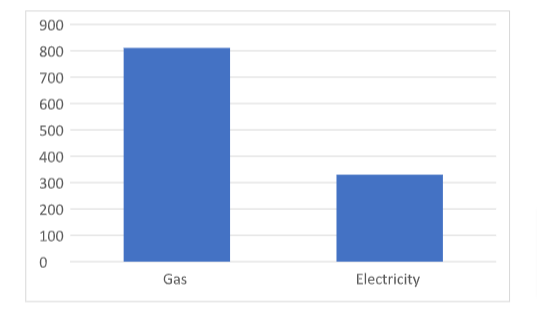 In addition to the switch from existing gas markets, electricity demand will be further augmented by demand for recharging of electric vehicles. The combined growth may require massive expansion of the existing electricity transmission and distribution network. It should be possible to achieve this,
despite the cost, but it may take some time to be implemented.

One slight area of concern is that the expansion of the electricity network may require significant new electricity transmission lines. Installation of these overhead lines have proved controversial in the past, and it is not clear whether this expansion would be publicly acceptable or not.

Another strand of government policy is to try and switch gas users to hydrogen. The UK government published its Hydrogen Strategy in August 2021. Its aim is to have 5 GW of Hydrogen production capacity by 2030. It has already chosen the first two Industrial Clusters, with two more to come in
2023. These initial plans will focus on delivering hydrogen to small groups of large industrial gas users and will require separate dedicated pipelines . However, in the longer term it envisages a massive scale up, with Hydrogen providing 20 to 35 % of UK Energy by 2050.
In the short and medium run it should be possible to add some Hydrogen to the natural gas pipeline system. National Grid Gas is currently investigating the feasibility of three scenarios that involve adding 2%, 5% and 20% Hydrogen. However, Natural gas and Hydrogen have very difficult characteristics and it may not be possible to use the same pipeline system to deliver both products
simultaneously beyond these levels. Gas is going remain widely used in the UK for the next few decades. So to achieve the government aims for Hydrogen it will probably be necessary to build a duplicate pipeline system. This is perfectly feasible, but cost is likely to be many billions of pounds and it may take a long time to plan and construct.

Gas is widely used throughout the UK market, but it is the dominant fuel in the Domestic market where it supplies almost 2/3 of the market. If government targets are to be achieved, then electricity will essentially need to displace gas in this market. This may not be easy to achieve, as gas is a great deal more expensive than electricity. There could be considerable consumer resistance to this switch. The table below shows the prices of electricity and gas to domestic consumers. It shows that electricity is almost four times as expensive as gas.

Gas and Electricity Prices to Domestic Consumers in November 2021 5 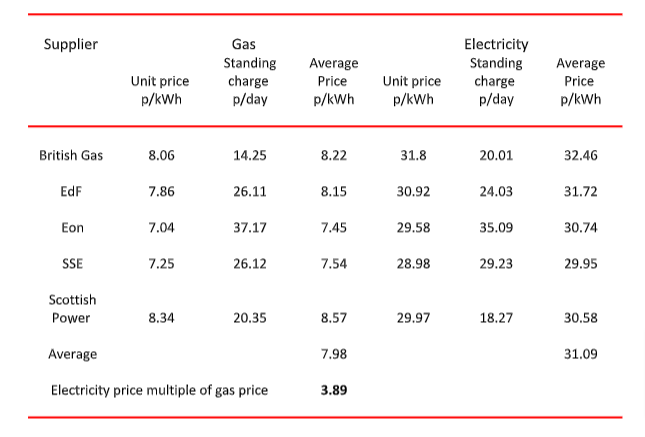 One way of getting round this price disparity is for domestic consumers to remove their gas fired boilers and replace them with Heat Pumps. These extract heat from the ground or the air outside a building and transmit it inside. These have one huge advantage for consumers as they are highly
efficient and can produce a lot more heat than the electricity input. This is measured by the Coefficient of Performance “COP”, which show the heat produced divided by the electricity input.
So, if a Heat pump produces 14 kW of heat and uses 3kW of electrical input it would have a COP of 4.67. In General COP figures for heat pumps are around 3-5. However, these are theoretical efficiencies, which may not be achievable outside a laboratory, rather like the official fuel mileage figures for cars, which can never be achieved in real life. A more accurate Guide Is the Seasonal
Coefficient of Performance or Seasonal Performance Factor (“SPF”) . The performance of Heat Pumps vary with outside temperature and when outside temperatures are low the electricity required to power the heat pump will rise. So, in winter, when they are most needed, they are least efficient. As a result, the SPF for heat pumps is likely to be no more than 3 and possible a little lower. The other drawback of heat pumps is that they produce hot water at a lower temperature than a conventional gas boiler, typically around 50 o C compared to around 75 o C. 6 This has two consequences.

The UK, in common with many other countries is committed to ending greenhouse gas emissions in the longer term. This means that ultimately gas consumption will fall to very low levels. This is the right policy, but there is likely to be a lengthy transition period over perhaps several decades, during which Gas demand will remain relatively high. There are a number of issues
which will slow down the switch to renewables.

In short gas is going to be around for a long time, yet and Government policy will need to accommodate and respect this.

1 2020 IEA World Energy Outlook
2 bcm means billion cubic metres per year
3 Digest of UK Energy Statistics 2021, Table 1.1
4 Energy Trends September 2021 Tables 4.1 and 5.2
5. Source: UK Power and Eon websites on 25 th November 2021, for sales to TW1 on dual fuel monthly direct debit basis for sales of 11000 kWh of electricity and 33,000 kWh of gas annually.
6 This is for the radiators in a central heating system . Hot water for showers and baths will probably be a little lower at around 55-60 o C
7 See “In depth guide to heat pumps”. The Energy Saving Trust.
8 High cost is due partially to the significant level of construction work involved