Over the last year and a half, gas prices in the UK have been on an unprecedented roller coaster ride, going from a low of 9p/therm in May 2020 to almost 280p/therm in October this year. This pattern has been repeated throughout Northwest Europe. Figure 1 below shows Day Ahead gas prices at the NBP since the start of 2019. 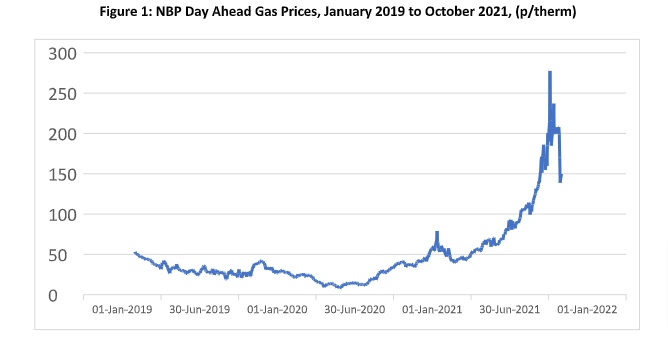 The surge in prices over the last four months has really been without precedent and has caused considerable problems for gas marketers in the UK, especially the smaller ones. Why have prices soared so much recently? Although there is one dominant factor, it has been caused by a perfect storm of upward price pressures all occurring at the same time.

What is not in dispute is that Gazprom seams to have established a level of influence over the gas market in Europe never seen before. The huge price surge in Early October 2021 was widely attributed to the news that Gazprom had not renewed its capacity booking for the Yamal gas export line for the gas year 2021/22. Over the last few weeks, the further gyrations in the market can often be linked to Gazprom activities, or the lack of them.